Upgrade your Galaxy Nexus to JellyBean

After seen the new features added to Android 4.1 (A.K.A. Jelly-bean), I immediately started seeking a way to get it into my phone. Waiting for the OTA (Over the Air) update is not acceptable! I didn’t participate the Google I/O convention, which means I didn’t get the new Nexus 7 nor a Galaxy Nexus Device with the JellyBean already preloaded. But, I do have my own Galaxy Nexus with Android 4.0.4, and since I have a Nexus device – it should be fairly easy to flash it in.

It wasn’t that far from the truth.

After reading some information about the different firmware the Galaxy Nexus has, I know that there are 2 main variant types: “takju” and “yakju”, where the first one is found on models bought in the USA, and the other is international. The first JellyBean build that I’ve found is JRO03C, but it’s not a full image, but an update to a specific build of Android 4.0.4. That required build was IMM76I and I had IMM76K. Problem.

On a side note: My phone just recently got the Android 4.0.4 OTA, even though this update is out for months now, it appears to be because I have a sub-variant of “yakju”. Since Google manage and support only the “takju” and “yakju” variants, all the sub-variants get updated later. it explains why I just now got my 4.0.4 OTA. Meaning, If you can’t wait for OTAs – get one of those variants on your phone, and you’ll be one of the first to get them! The needed IMM76I build is a “yakju” variant.

So, back to my problem. I needed to have the IMM76I build instead of my IMM76K, in order to apply the JellyBean updated. That image can be found on the Google’s Factory Images for Nexus Devices site, or in goo.im, which also have a massive collection of ROMs for all phones/tablets. After downloading it – I have to flash it to my device. The easiest way I found was to use Galaxy Nexus Toolkit, which made my life much easier, even just for rooting purposes. There’s even an option to download the images straight from there, but I haven’t tried it. Just follow the instructions on the Toolkit and on that XDA post to get it done. WARNING: All your data will be deleted on the process, make sure you back up. Also, make sure you have the appropriate device, my device is a GSM, if you have CDMA/LTE, there are other images needed to be download.

After getting the “right” build for me, I only needed to update it with the new JellyBean OTA. After downloading the OTA (can be found in goo.im or here) I copied it to my phone, and run it from the Phone’s Recovery. If you don’t have a recovery installed – you can use the Galaxy Nexus Toolkit I presented above. I installed the CWM touch recovery, and it’s very convenient in compare to the non-touch recovery that I used in the past.

I did a factory reset at the end of it, to get the full new-user-experience, and I got to say – It’s even better than the one on ICS.

Don’t forget to give some quick pressed on the “Android version” line on this “About phone” screen. This will give you a cute picture related to the current Android version. This is the one from the new JellyBean: 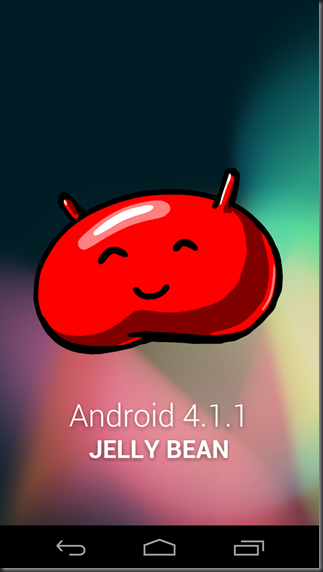 All that left to do now is to explore the new API, and find some cool stuff. My next post will be on one of those…